Australian flag carrier Qantas is currently studying which aircraft will meet its post-2020 requirement for ultra-long non-stop flights of more than 16 hours.  The airline said it is considering the A350-900ULR, the latest variant of the Airbus widebody that will be used by launch customer Singapore Airlines to re-open direct, non-stop links between Singapore and New York in 2018.  Qantas is also looking at Boeing’s new 777-8X but, with the US-built jet not due to enter service until 2022/23 or later, the Australian carrier said it was in no rush to make a decision.

Qantas added it is working with both manufacturers to ensure each of the next-generation aircraft are capable of flying the very long distances it requires, and offer the right specifications that will allow the Australian carrier to develop its route network well into the next decade.  Under their current specifications, the A350-900ULR and 777-8X will be capable of flying non-stop for up to 19 hours, although both will carry fewer passengers than their respective standard variants. 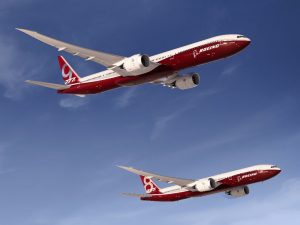 The Boeing 777-8X is also under consideration for the airline’s next generation of ultra-long range airliner.  (Photo Boeing)

Because of Australia’s geographic location, Qantas has always operated some of the longest flights in the world but, moving into the next decade, it intends to fly even further with non-stop services between destinations such as Sydney to New York and London.