EasyJet has started to roll out a higher-density seating configuration across its Airbus A320 fleet after becoming the first customer to adopt the European manufacturer’s 186-seat Space-Flex cabin.  The London Luton-based based low-cost carrier is incorporating the revised layout as standard on new-build aircraft, the first of which, G-EZPI (c/n 7104), was handed over in Toulouse on May 19.  This has since been joined by a further three examples – G-EZPJ (c/n 7132), G-EZPK (c/n 7177) and G-EZPL (c/n 7183).

EasyJet said the new A320s will not only deliver cost per seat savings when compared with its current 180-seat examples, but will also support the carrier’s target to reduce its carbon emissions per passenger kilometre by 18% by 2020 compared to the 2013 figures.

Internally, the cabin has received a number of improvements to accomodate the additional seating including new modern galleys, a partition in front of row one providing passengers with more privacy and protection during boarding and a fully wheelchair accessible toilet in the rear cabin, while it has also rolled out a new tray table design that can accomodate a tablet device.  Despite the increase in seating, both the average seat pitch and minimum seat pitch across the fleet has remained the same.  This has been achieved by using previously unused space at the rear of the aircraft. 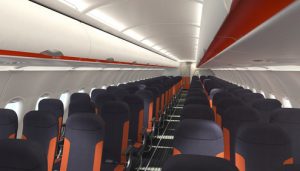 The Space-Flex 186-seat configured Airbus A320 is entering service with easyJet. (Photo easyJet)

Gary Smith, Business Lead for the new jets, said: “With the new aircraft configuration, we took the opportunity to look at all aspects of our cabin design and the result is a really clean, modern new look.  We now have LED lighting throughout and an updated colour scheme.  The new partition provides front row passengers with an enhanced experience while allowing our crew space in which to rest.  We are the first A320 operator with the Space-Flex configuration and all our new A320s will now be delivered with 186 seats.  Additionally, our existing fleet of 180-seat A320s will be retrofitted and upgraded over the next two years.”

The airline is set to receive four more 186-configured A320 this coming summer, all of which will be based at London/Gatwick.

Posted in News Tagged with: A320, Airbus, easyjet