KLM Royal Dutch Airlines has added a splash of colour to one of its fleet of Boeing 777-306ERs to celebrate the carrier’s roots. 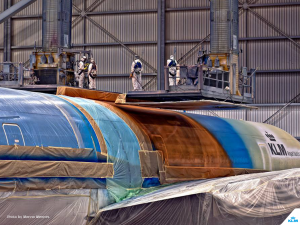 The front end of PH-BVA (c/n 35671) has been painted orange – the national colour of the Netherlands – and is faded into the carrier’s traditional blue livery at the rear.  The colours of the Dutch flag have been incorporated into the jet’s cheatline.

The paint scheme was inspired by a post the airline made on social media, published on King’s Day 2015.  It featured a picture of an orange 777 and asked KLM’s followers: “Should we colour orange next year on King’s Day? #OrangeExperience”.  It attracted 30,000 likes and 2,500 positive responses. 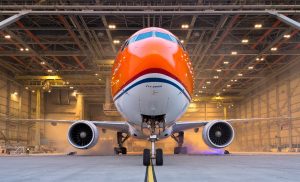 The colours of the Dutch flag have been incorporated into the jet’s cheatline. KLM/Menno Mennes

The specially painted aircraft was due to enter service on June 15 having been rolled out of Hangar 14 at Amsterdam Airport Schiphol the previous day.  KLM has said it will use the orange 777 to operate the ‘Medal Flight’ that brings the Dutch Olympic heroes home from this summer’s Olympic Games in Rio de Janeiro, Brazil.

It took a team of 35 people four days to spray on the orange livery, with 335 litres of paint used.