The March 2017 issue of AirForces Monthly is now on sale and includes a comprehensive force report on the Bulgarian Air Force, including the latest on the country’s protracted efforts to field a new fighter. Alexander Mladenov and Krassimir Grozev look at the transformation of this small European air arm that still relies on Soviet-era frontline jets.

Until a new multi-role fighter can be introduced, the future of the MiG-29 air superiority fighter seems assured. However, its Cold War counterpart, the Su-25, may now be in its final year of service. 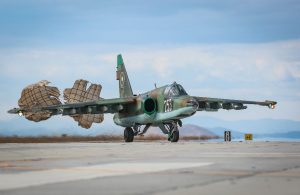 The final base for the Bulgarian Frogfoot is Bezmer, equipped with a squadron of 14 aircraft, six of which have been modestly upgraded.

Lt Col Milen ‘Spider’ Dmitrov, an experienced Frogfoot driver, compares the Su-25 with its US Air Force counterpart, the A-10 Thunderbolt II:

“The Russian-built Su-25 differs greatly from the American jets. The A-10s were being upgraded within a few years of entering service and have continued to be modernised ever since. Our platform is virtually untouched since it arrived 30 years ago. As a ground-attack pilot, I can see we need the upgrades, but it is very difficult to make this happen, not least because we are dependent on the Russian manufacturer from the start.

“I think the manoeuvrability of the two types is comparable, but that maybe the A-10 looks more manoeuvrable due to its much larger size and they can also fly a lot lower than us. In terms of the two types’ ‘deployability’, undertaking a six-month overseas deployment is just not something that we would do… But don’t forget that we have been ‘forward deployed’ here from our home base at Bezmer while our airfield is upgraded, so we are used to life on the road as well. We have proved we are very reliable. We are a strong fighter.”

Look for the latest issue of AFM for the full story of the Bulgarian Su-25s and the Bulgarian Air Force (Bulgarski Voennovazdushni Sili – BVVS) as a whole. 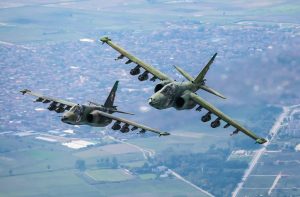