European aerospace giant Airbus is celebrating the second of two major landmarks in as many months after the A350-1000 successfully completed its maiden flight.  Thunderstorms and torrential rain did little to dampen the occasion, which came just weeks after the company delivered its 10,000th aircraft.

Notably, most first flights are approached by the manufacturer with a degree of trepidation, but Airbus gathered hundreds of journalist, suppliers, customers and employees at its Toulouse/Blagnac facility to witness the flight, reflecting a high degree of confidence in its newest widebody jet. 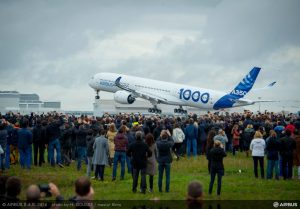 Departure was originally planned for around 10.30am and, after keeping the waiting crowd in suspense, the prototype A350-1000, F-WMIL (c/n 057), lifted off from a saturated Runway 32L shortly before 11am on November 24.  The take-off marked the start of a 1,600-hour, three-aircraft flight test campaign that is due for completion inside 12 months.

Commenting on the maiden sortie, Airbus President and CEO Fabrice Brégier said: “We have seen today the world’s most modern and efficient passenger aircraft – the A350-1000 – in action for the very first time, adding soon to the successful A350 Family.  My congratulations and thanks go to all the teams who have contributed to make today’s flight happen.”

He added: “We are equally pleased that many customers have witnessed this important milestone today together with us – here from our headquarters in Toulouse.” 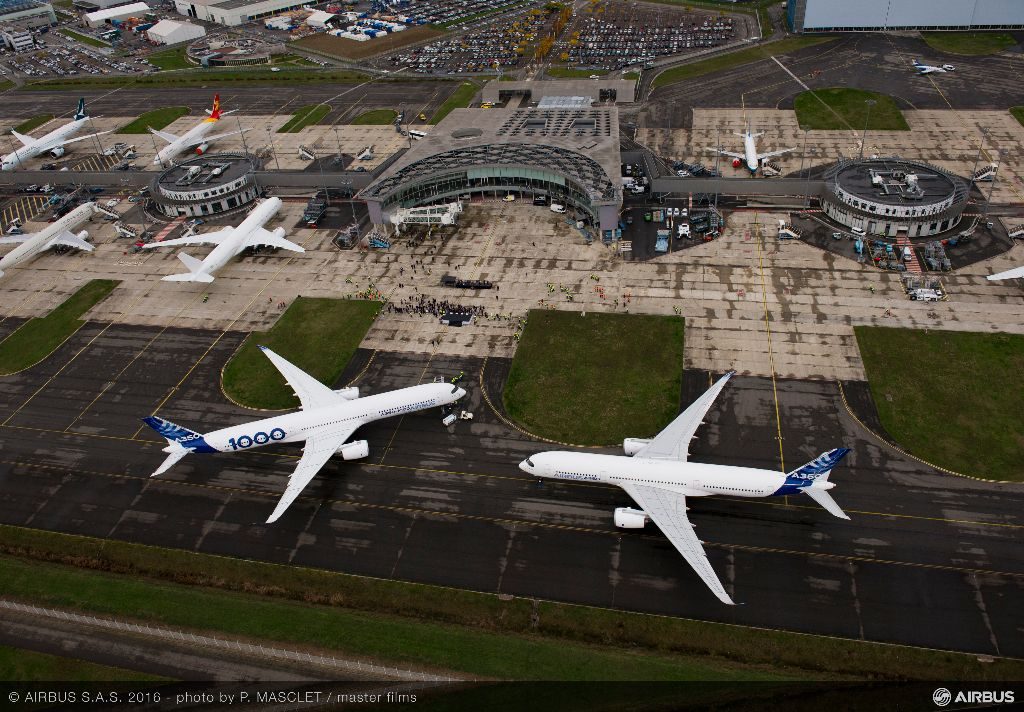 With a fuselage length of 242ft 5in (73.78m), the A350-1000 is the longest twin-jet ever produced by Airbus.  It shares a high degree of commonality with its -900 stablemate, though the latest variant of the family is around 23ft (7m) longer and can accommodate an additional 41 seats, up from 325 to 366.  It also features more powerful Rolls-Royce Trent XWB engines, each offering 97,000lb of thrust over the previous 84,000lb, along with improved aerodynamics and six-wheel main bogies to reduce pavement loading.

François Caudron, Airbus’ Senior Vice President Marketing said the newest member of the A350 Family had been developed specifically to meet the requirements of potential operators.

“We worked very closely with our customers on the A350 programme to make sure we were bringing a product to the market that met their requirements,” Caudron explained.  “When we came to discuss what would be the A350-1000, there was a real consensus that it should be able to replace the Boeing 777-300ER.  This is an almost 1,000 aircraft market, but obviously we needed to bring more comfort and a 25% fuel burn reduction.”

This was achieved, Caudron noted, through the use of a clean-sheet deign.  The A350-1000 is around 40 tonnes lighter than its competitor at maximum take-off weight, “but because it is more efficient, it is able to fly 450nm (833km) further”.  He was also bullish about the XWB’s prospects against the next-generation 777X.

“The new 777-9 is derived from the -300ER so the aircraft already starts with a weight penalty [against the Airbus jet], then it has bigger wings and engines so it will be around 35 tonnes heavier than the A350-1000.  Our aircraft is perfectly positioned in the sweet spot currently occupied by the 777-300ER and it will be around 15% more efficient than the -9.” 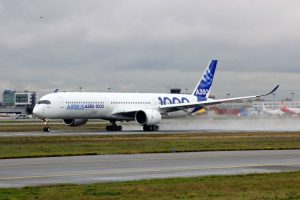 The first A350-1000 powers off a saturated Runway 32L at Toulouse/Blagnac. (Key-CraigWest)

Chris Young, Rolls-Royce’s (RR) President – Small and Medium Engines extolled the virtues of the Trent XWB, the sole powerplant for the A350 Family.

“We aimed for maximum commonality, starting at 84,000lb of thrust to power the A350-900,” Young told journalists during a technical briefing in Toulouse.  “This is the engine that’s in service today and it’s performing immaculately.  Customers have been very happy with it and we’re achieving almost 99.9% dispatch reliability which, for a brand new engine, is a phenomenal achievement.  Now our focus is on developing that engine and getting it ready for the -1000.”

Development of the Trent XWB family has been continuous.  The 97,000lb variant was launched in 2011 and ran for the first time in 2014.  Since then, RR has embarked on what Young dubbed a “truly global test programme”.

He added: “We have to prove the basic capability of the engine, the maturity of the engine and show that it’s safe and able of flying.”  This included cold weather and crosswind testing in Manitoba and Mississippi respectively, as well as at RR’s own facility in Derby.  The manufacturer also co-operated with Airbus on an extensive flight campaign, completing almost 180 hours on the A380 flying testbed. 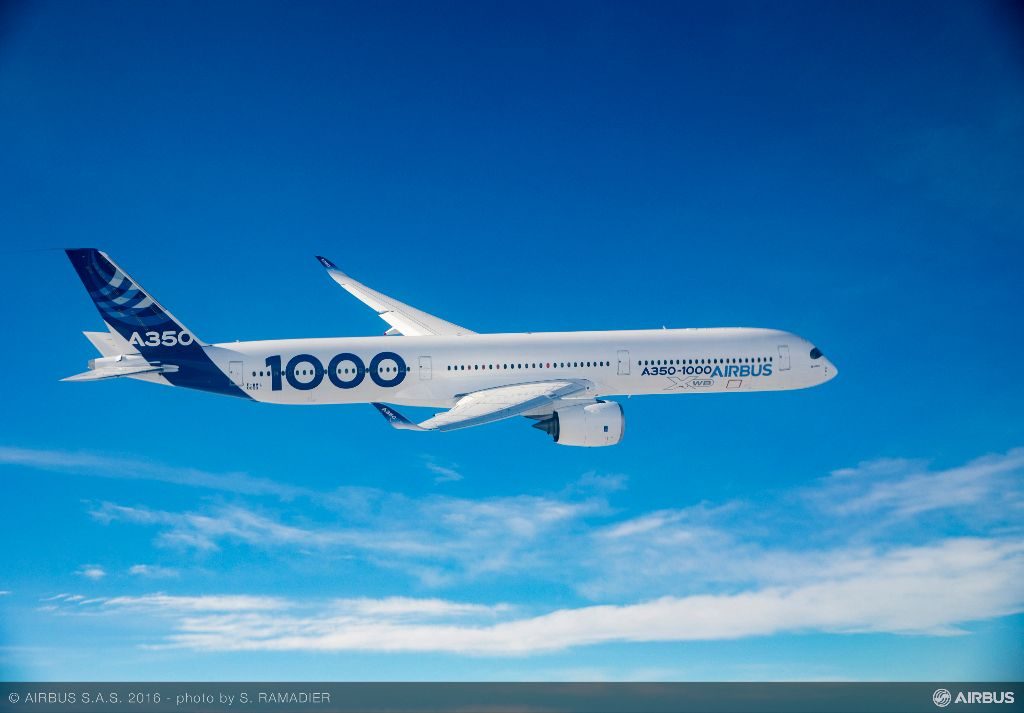 The aircraft was airborne for 4hrs 18mins. (Airbus)

After departing from Blagnac in the company of chase plane Dassault Falcon 20, F-GPAA (c/n 103), the prototype A350-1000 routed south towards the Pyrenees and one of the manufacturer’s test areas.  The first element of the sortie was flown with the fly-by-wire system in the most basic ‘direct law’, where pilot inputs are transmitted directly to the flight controls with no protection.

Utilising a block of airspace between FL100 and FL150, the crew initially worked for around 2hrs 30mins to explore the -1000’s handling and flight envelope, flying at minimum and maximum speed with flaps at configuration 3 and the landing gear extended.  After successfully testing the pressurisation and flight control systems, the aircraft was cleaned up.  The gear was retracted for the first time, and fly-by-wire was switched to ‘normal law’, the regular operating configuration, before the crew climbed up to FL250 for further testing including acceleration up to the maximum Mach number.

The final phase of the sortie consisted of a descent back to medium altitude for low-speed handling and landing configuration checks, then returning to Toulouse.  The assembled crowd was treated to a low-level flypast before the jet arrived back at Blagnac after 4hrs 18mins in the air.

Though the A350-1000 is a derivative of the now-certified A350-900, Airbus’ Chief Test Pilot Captain Christoph Cail explained the need for a comprehensive flight test campaign.  “When you look at the differences, we have a higher take-off weight, modified wings, new landing gear, increased engine thrust and a longer fuselage, so there are lots of elements that require testing.  However, as we’ve reached a high level of maturity on the -900 programme, we have been able to reduce the flight-test campaign to less than a year and just three prototypes [rather than five on the A350-900].”

Airbus had already undertaken a significant volume of work on the -1000 even before the aircraft took flight.  This included lab testing of the landing gear, electrics and flight controls, systems integration and crew training on the ‘Aircraft Zero’ simulator, and engine testing on a dedicated A380 flying test-bed.  Once the first prototype was rolled out, the manufacturer then performed aircraft and flight test installation, ground engine runs and finally low- and high-speed rejected take-offs, carried out at 100kts and 140kts respectively.  The jet was then thoroughly inspected before being handed over to the flight crew for its maiden sortie. 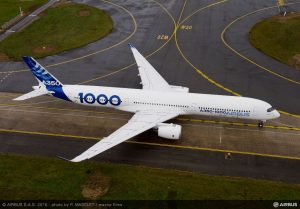 The three prototypes used for the certification process (see table) are expected to amass around 1,600 flying hours over the coming months.  This includes cold and hot weather and high altitude campaigns to be flown by MSN 071, while MSN 065 will be used for cabin development, route proving and ETOPS and will feature a fully furnished cabin.

Airbus has also installed a variety of time-saving measures in its test fleet, including transferable ballast that allows engineers on board the aircraft to move its centre of gravity by up to 10% in flight.  This was previously only possible on the ground and required multiple sorties.

The test station installed in the cabin has direct access to the A350’s flight computers, allowing for instant adjustments of the control systems.  Data is also fed real-time to five different telemetry rooms – two in Toulouse and others in Filton, Hamburg and Bremen, enabling ground-based specialists to monitor the progress of the sortie.

The manufacturer has wasted little time since the maiden flight.  The first prototype was airborne again on November 29 as the test campaign gathers pace.  Certification, and delivery to launch customer Qatar Airways, is expected during the latter half of 2017. 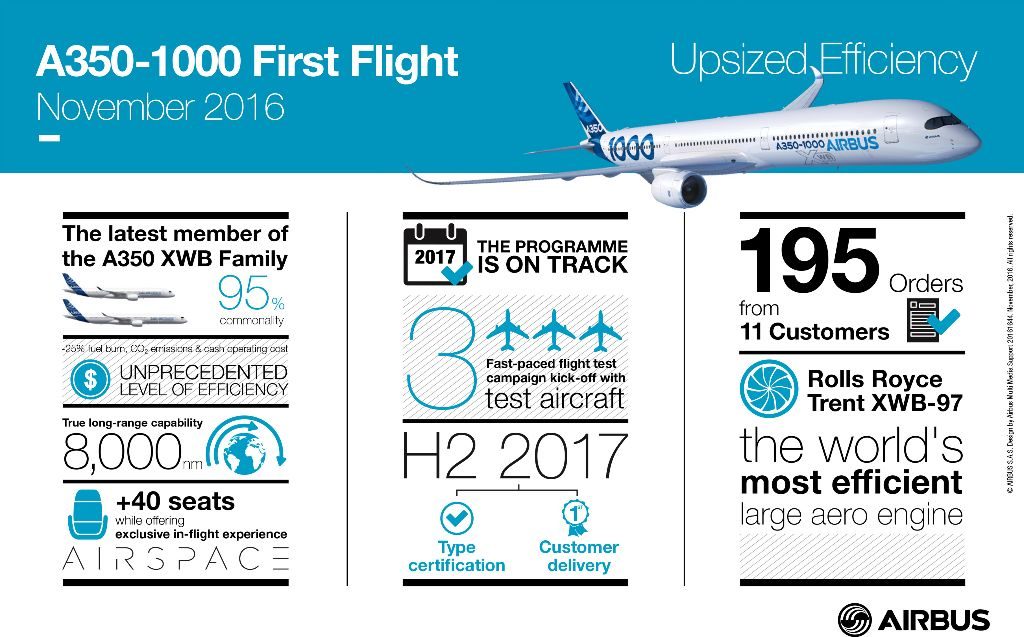