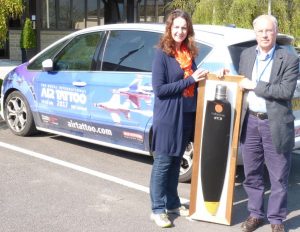 An historic artefact which helped propel aviation into the jet age will go on public display in Gloucester thanks to the RAF Charitable Trust.

The blade, part of the propeller fitted to the experimental turbo-prop Gloster Trent Meteor I EE227, belonged to the late Fred Crawley who donated it to the RAF Charitable Trust, of which he was a Trustee. It is to go on display at the Jet Age Museum.

Museum archivist Richard Hentschke said: “This turboprop blade has a significant place in the history of the Jet Age, and therefore also for the Jet Age Museum. The world’s first turboprop aircraft was a modified Gloster Meteor used as a testbed for the Rolls-Royce Trent engine. With five-bladed propellers fitted to its two modified Derwent jet engines it pioneered the type of propulsion used by many short and medium range airliners today.”

RAFCT Director Justine Morton said Fred was a long term supporter both of the charity and of the Royal International Air Tattoo. He donated a large number of interesting aviation related items to the charity and donated a significant sum of money that was to be used to benefit the many volunteers who help stage the Air Tattoo each year.

She said: “Fred was very happy for the mounted blade to be loaned to the new Jet Age Museum at Gloucester Airport so people could view it as he recognised it was a significant piece of Gloster Aircraft Company’s history.”

Jet Age Museum historian and Trustee Tim Kershaw said Meteor I EE227 had seen RAF service with 616 Squadron before being transferred to Rolls-Royce at Hucknall for the new engines to be installed. It first flew on September 20, 1945, with Gloster’s chief test pilot Eric Greenwood at the controls.

Mr Kershaw added: “Gloster had schemed the project in January 1944 as Gloster Meteor I type aircraft with Rolls-Royce W2B/37 propeller combination installation after Sir Stanley Hooker’s research team showed the potential fuel economy for speeds below 450mph (724kph) of a jet engine fitted with reduction gear and an airscrew.  Although Greenwood suffered 18 complete engine failures in 21 flights, the programme continued until March 1948. It led to Rolls-Royce developing the highly successful Clyde and Dart turboprops.”

The Jet Age Museum is devoted to the preservation, conservation and public display of Gloucestershire’s world-class aviation heritage and holds a major collection of Gloster Aircraft Company aircraft, artefacts and archives.