Viking Air, the Canadian company now producing Twin Otters, is keen to gain some of the maritime surveillance market in Asia. It is offering the Guardian 400 Multi-Role Sensor Aircraft (MRSA) and a mock-up of the aircraft’s nose could be found at the company’s LIMA stand.

Inside the nose on display was a Selex Osprey 30, a 28VDC version of Leonardo’s Seaspray 5000 maritime surveillance radar which requires AC electrical power, as well as an L-3 Wescam MX-15 electro-optical/infrared (EO/IR) turret. The EO/IR system is retractable so that spray doesn’t get on the system as it departs/lands on water or in poor weather conditions.

Since restarting the Twin Otter production line in April 2007, Viking Air has sold 144 Twin Otter 400s, with production backed up to the end of next year. There are two military customers operating the Guardian 400. The United Arab Emirates Joint Aviation Command (JAC) operates six and the Vietnam People’s Navy operates three, although Viking would not confirm this or their configurations. The Vietnamese examples are known to have been modified by Ikhana Aircraft Services of Murrieta, California with an Elta EL/M-2022 maritime radar system and a 10-inch MiniPOP day/night EO turret.

However, Field Aviation, Viking’s preferred system integrator, has come up with a new approach, preferring to put the systems into the nose section. Joar Gronlund, Senior Advisor, Field Aviation told AFM: “It will turn the Twin Otter 400 into a versatile multi-role aircraft suited for surveillance, search and rescue, medevac and other forms of transport, without the operator having to make time-consuming changes to the aircraft. It can also be delivered with ITAR-free systems.” Alan Warnes 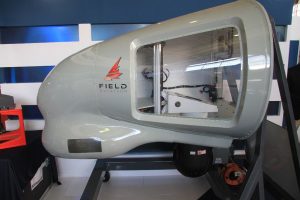