Norwegian regional carrier Widerøe has been confirmed as launch customer for the Embraer 190-E2, the first member of the Brazilian manufacturer’s second generation E-Jet family.

The airline signed a contract on January 17 for up to 15 aircraft, consisting of three firm orders for E190-E2s and purchase rights for a further 12 examples (variant unspecified).  The total deal is potentially valued at up to $873m if all options are exercised, with initial deliveries expected to take place during the first half of 2018.

John Slattery, President & CEO, Embraer Commercial Aviation remarked: “The market is keen to know the identity of the E190-E2 launch operator and we’re pleased to end that suspense on this Valentine’s Day – Widerøe is the ‘perfect match’.  The airline has a special place in our hearts; they are proven pioneers in their field who have achieved major success and remain hugely ambitious, similar in many ways to the path taken by Embraer.” 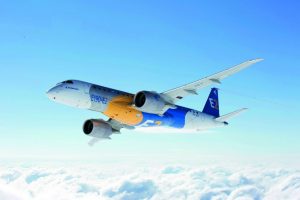 Stein Nilsen, Widerøe’s CEO commented: “We will be very proud to be the first airline in the world to operate the E190-E2.  Knowing the hard-work Embraer is putting into the certification campaign, especially in terms of maturity, we have every confidence in a smooth entry into service.  The E190-E2 will be a big leap in our history, and planning for the first deliveries is now well underway.”