The photos initially appeared with a description stating that the Tornado was at Qayarrah AB south of Mosul, a facility that was held by terrorists of the so-called Islamic State (IS) until last summer. It was later confirmed that the aircraft was at Erbil in Iraq’s Kurdistan region.

As well as the Tornado – apparently ZA597/‘063’ – related photos showed a US Air Force C-17A airlifter on the Erbil ramp. Other recent imagery shows the base hosting US Army AH-64, CH-47F and UH-60 helicopters as well as Iraqi Army Aviation Corps EC635s. 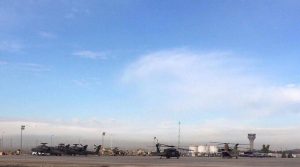 Last December, a photograph posted on the Iraqi Air Force’s Facebook site showed an RAF Typhoon at Erbil. The RAF  later said that this aircraft diverted there due to a ‘technical issue’.

The Typhoon FGR4 was photographed on the ramp at Erbil on December 14. Although the image is of poor quality, the code appears to be ‘FN’, making it ZK348. 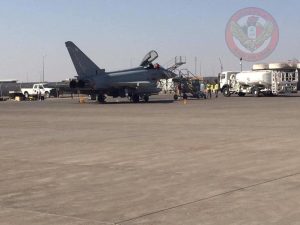 However, unconfirmed reports suggest that the Tornado at least was visiting Erbil for familiarisation work with the Iraqi armed forces.

Under Operation Shader, both RAF Tornados and Typhoons are taking part in the multinational effort against IS from their base at RAF Akrotiri in Cyprus.

A full account of anti-IS air operations will appear in the March issue of AirForces Monthly.