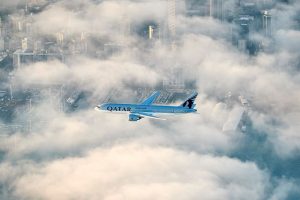 Qatar Airways’ first flight to New Zealand flies over the city of Auckland on its final approach to the airport. (Qatar Airways)

The inaugural service departed Doha on February 5 and arrived in Auckland early the following day – a significant day for all New Zealanders as it was Waitangi Day, celebrating the 1840 signing of the Treaty of Waitangi, New Zealand’s founding document.

Operated by one of the carrier’s Boeing 777-2DZ(LR)s, A7-BBB (c/n 36013), the flight took 16hrs 20mins to complete and covered 9,032 miles (14,535km). After touching down in New Zealand for the first time the aircraft was given a traditional water cannon salute by the Auckland Airport Fire Department.

Travelling on board the flight was Qatar Airways’ Group Chief Executive Akbar Al Baker who said: “The launch of our new service to Auckland is an important milestone for us as we expand both in the region and globally across our network providing more options and better connections to exciting business destinations in Europe and the Middle East.  Arriving on Waitangi Day and achieving the world’s longest flight for the return record-breaking service makes this an even more momentous occasion for Qatar Airways and provides another accomplishment to celebrate in this our 2oth year of flying the flag internationally for Qatar.”

Auckland is the first New Zealand city served by Qatar Airways.  The new daily flights are operated by the carrier’s 777-200LRs, which are configured in a two-class layout with 42 Business Class and 217 Economy Class seats.

The carried added the Doha-Auckland-Doha daily rotations will also offer 116 tonnes of belly-hold capacity every week to support the growing imports of raw, industrial and consumer materials into New Zealand.  While in Qatar the Hamad International Airport freight terminal, operated by Qatar Airways Cargo, offers ‘QR Fresh’ a seamless temperature-controlled handling and storage solution, to deliver perishable products such as dairy produce, meat and fruits from Auckland into the Middle East and on to major European markets.