Qantas has unveiled a new livery as part of a brand overhaul ahead of the arrival of its first Boeing 787-9 Dreamliners next year.

While the airline’s classic red and white colour scheme remains unchanged, the tweaked livery features a streamlined kangaroo on the tail, a silver band on the rear fuselage and a slimmer font for the Qantas titles.

Other changes include the addition of Qantas titles on the belly of the aircraft, and the inclusion of the kangaroo on the inside of the wingtips, making it visible to passengers. The airline’s ‘winged kangaroo’, which featured on the tails of the airline’s jets between the 1960s and 1980s, returns under the cockpit window where it will be integrated with the aircraft’s name.

The livery change is only the fifth time Qantas has altered its tail design since it was first introduced in 1944. The last update came in 2007 as the airline introduced its Airbus A380s.

Qantas Group CEO, Alan Joyce, revealed the new design to around 1,000 employees and guests at a special event in one of the airline’s hangars in Sydney on October 27.  Joyce, also unveiled the new Business Suites and Economy seats that are set to feature on the airline’s new 787 fleet.

“Since the image of a kangaroo first appeared on a Qantas aircraft more than 80 years ago, it’s come to represent the spirit of Australia. When passengers see the Qantas tail at airports around the world, it’s a symbol of home,” explained Joyce. “We wanted to make sure our brand remained familiar but we also wanted it to be more modern and dynamic, like the 787 and like Qantas.  When we looked at the history, we found that the logo has been updated around the time of a game-changing new aircraft joining the fleet.  It’s a tradition that goes back to the Lockheed Constellation in 1947, the B747-300 in 1984 and the A380 in 2007.  A fresh brand helps symbolise the new era Qantas is entering as we head towards our centenary.  It’s an era of new destinations, new technology and a new standard of service.”

Qantas consultant designer, Marc Newson, worked in partnership with Australian design agency Houston Group to create the new look.  He said: “Aircraft tails are a fantastic canvas to work on and the Qantas logo is one of the most recognisable in the world.  This re-design aims to retain the fundamental essence of the flying kangaroo but also move the brand forward.  This new brand is more streamlined and the shading behind the kangaroo gives a better sense of movement and depth.  A silver band now extends from the tail to the rear of the fuselage, to give a more premium feel.  The typography for the word Qantas, which measures almost two metres high on the 787, has been carefully streamlined.  And Qantas will appear on the aircraft’s belly, so you can tell when it’s the national carrier flying overhead.” 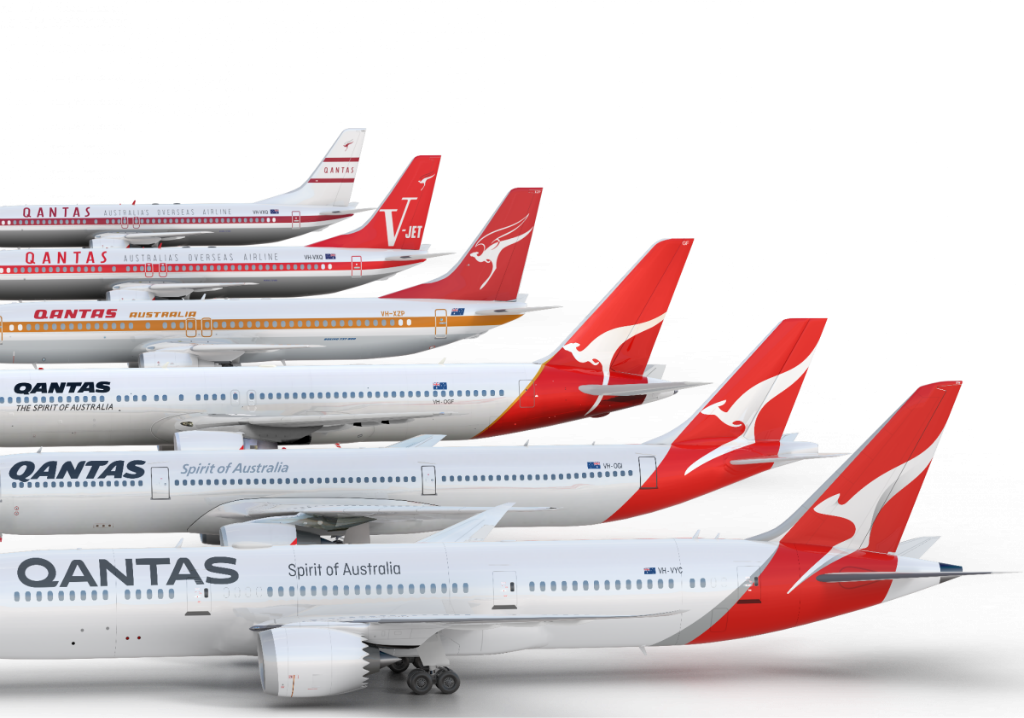 The evolution of the Qantas livery. Qantas

Airbus A330-303 VH-QPJ (c/n 712) is the first aircraft to wear the new livery, which will gradually be rolled out across the Qantas network as and when the aircraft reach scheduled re-paints.  The airline still has some jets wearing the pre-2007 livery.  Qantas plans to have the entire fleet in the new scheme in time for its centenary in 2020.