This firm order follows an MoU announced earlier this year at the Farnborough Airshow.  The contract signing was witnessed by Tran Dai Quang, President of the Socialist Republic of Vietnam and François Hollande, during the French President’s state visit to Southeast Asian nation.

Based in Ho Chi Minh City, Jetstar Pacific is a joint venture carrier between Vietnam Airlines (70%) and the Qantas Group (30%).   The new aircraft will join the carrier’s existing fleet of 12 leased A320 Family aircraft, and this order marks the first direct purchase by the airline of an Airbus aircraft type.

Le Hong Ha, CEO of Jetstar Pacific, said: This order is a key milestone for our operation here in Vietnam and beyond.  These new aircraft will be used primarily to expand our international network from Vietnam as part of the wider Jetstar Group.  As competition grows in Vietnam, we believe that the A320 and our value-based quality service will place us well to attract a growing share of the market.”

During the same ceremony Vietnam Airlines signed an MoU for ten more A350-900s.  These additional aircraft will be used by the airline to fly new non-stop services to the US, starting with flights between Ho Chi Minh City and Los Angeles.  The carrier became the first airline in East Asia to operate the A350 XWB when it took delivery of its first example on June 30, 2015.  It currently has four aircraft in service, with another ten on firm order. 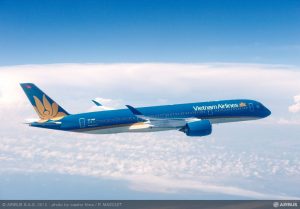 Vietnam Airlines is acquiring ten additional Airbus A350-900s, bringing its commitment to the type to 24. (Airbus)

Duong Tri Thanh, President and CEO of Vietnam Airlines, said: “The intention to acquire these additional aircraft reflects our excellent experience with the A350 since it entered service last year.  With its very long-range capability, economic fuel consumption and spacious cabin, the A350 is the most suitable aircraft for our proposed intercontinental routes to Europe and the US.  The start of non-stop transpacific services with the A350 is yet another example of the commitment we have at Vietnam Airlines to strengthen our position as one of the world’s leading international carriers.”

To date, Airbus has recorded a total of 810 firm orders for the A350 XWB from 43 customers worldwide.  A total of 36 A350-900s have been delivered so far and the aircraft is now in service with eight carriers, including Vietnam Airlines.