Cessna Aircraft Company has powered the electrical distribution system on its new Citation Longitude super-midsize business jet.  The milestone occurred three weeks after the company successfully mated the wing and fuselage of the first airframe. 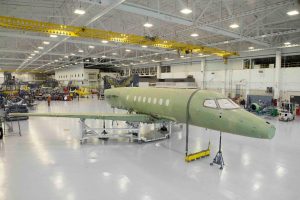 The milestone came just weeks after the wing was mated to the fuselage of the first jet.  (Textron Aviation)

“We continue to meet our milestones through an industry-leading development schedule in order to get the Longitude into the hands of our customers,” said Scott Ernest, president and CEO, Textron Aviation.  “The power on stage allows our team to begin verifying the aircraft’s electrical power system and paves the way for functional tests and engine runs that will get us to first flight in the coming months.”

The 12-seat Longitude is a clean-sheet design and features the next evolution of the Garmin G5000 flight deck.  It is powered by FADEC-equipped Honeywell HTF7700L turbofan engines with fully integrated autothrottles.