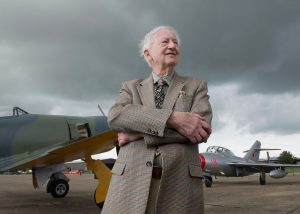 Ellis is credited with sharing in the downing of a MiG-15 in combat over North Korea in 1952, but has only ever seen the aircraft through the gun sight of an 802 Naval Air Squadron Sea Fury FB11 fighter aircraft.

He explored the Norwegian Air Force Historical Squadron MiG-15 in detail, sitting in the cockpit seat and surveying the airfield.  He then saw a Hawker Fury, flown by Richard Grace of Air Leasing Limited, fly into the airfield before landing opposite the MiG-15.

When asked what he thought of his experience, Brian Ellis said: “Awesome.  I think that is the word that comes to me. It was quite emotional. What a privilege it was to spend your days flying these aircraft.  I used to live in these things every day.”

The Mikoyan-Gurevich MiG-15UTI will be flying in the Duxford Battle of Britain Air Show, representing the jet fighter era as it flies alongside a British de Havilland DH100 Vampire .