EL AL Israel Airlines, Boeing, and Air Lease Corporation are celebrating the delivery of the airline’s first Boeing 787 Dreamliner this week. The 787-9, which is being leased through an agreement with Air Lease Corporation, touched down in Tel Aviv on August 23 following a nonstop, 6,746-mile  delivery flight from Washington.

EL AL has been an all-Boeing carrier since taking delivery of its first new Boeing aircraft in 1961 and currently operates a fleet of more than 40 airliners including Next-Generation 737s, 747s, 767s and 777s. 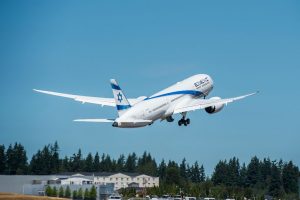