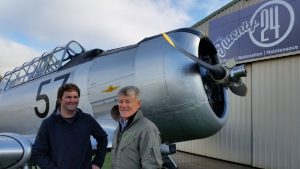 Almost 18 months after being damaged in a landing accident following the 2016 Warbirds Over Wanaka Airshow in New Zealand, North American Harvard ‘57’ is back in the air.  The aircraft, which is part of the Roaring 40s Harvard aerobatic display team based at Ardmore in Auckland, suffered significant damage when it was involved in a ground loop on landing at Wanaka on the Monday after the airshow.

The job of repairing the trainer was given to Callum Smith and his team of engineers at Twenty TwentyFour Limited, based at Wanaka Airport.  “There was damage to one wing, the engine and under carriage.  We were able to source most of the replacement parts relatively easily but there were one of two pieces which proved a bit harder to locate and that’s what has caused the delay in getting the aircraft flying again,” says Callum.

On completion of the repairs the aircraft was test flown at Wanaka by one of New Zealand’s most accomplished warbirds pilots and Warbirds Over Wanaka display planner, John Lamont.

‘Harvard 57’ was first shipped to New Zealand in July 1943 and was assembled at Hobsonville air base a couple of months later.  The aircraft served with 4 Squadron for many years before going into storage at Woodbourne in 1972.  After release from the RNZAF in 1977 it was purchased by an ‘off-shore’ buyer but never left New Zealand.  After passing through several owners, including a stint as a playground attraction the aircraft was eventually purchased and restored to flying condition at Ardmore during the early 1990s.  The new ownership syndicate included a number of Warbirds Over Wanaka Airshow regulars Frank Parker, Keith Skilling, Dave Lumsden and Chris Lee.

Frank describes the state of the aircraft when the syndicate purchased it as a “forlorn fuselage”.  The original estimate to restore the aircraft to flying condition was put at $165,000 but Frank says, as with many such projects, the final bill was more than double that.

The aircraft was sold to its current owner and another well-known Warbirds Over Wanaka pilot, Liz Needham in 2010.  ‘Harvard 57’ is expected to return to Wanaka for next Easter’s 30th anniversary Warbirds Over Wanaka International Airshow as part of the New Zealand Warbirds Association Harvard team.  The Warbirds Over Wanaka Airshow is being held on March 30th, March 31st and April 1st.  www.warbirdsoverwanaka.com