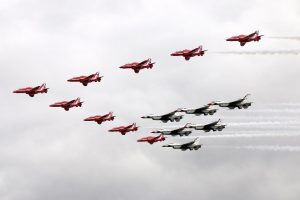 A series of spectacular flypasts and  displays ensured the USAF’s 70th anniversary was celebrated in style at a sold out Air Tattoo at RAF Fairford last weekend.

The airshow, which took place over three days (July 14-16), attracted a record crowd of 160,000 people who enjoyed  flying demonstrations by some of the world’s leading pilots.

Among the aerial highlights were the USAF Thunderbirds, with its F-16 Fighting Falcons. The team was joined on the friday by nine Red Arrows’ Hawks for a colourful joint flypast to launch the airshow.

Joining the Thunderbirds to celebrate the USAF anniversary were several warbirds including a B-17 and P-51D Mustang, plus a F-22 Raptor and a dramatic flypast by a number of UK and European based USAF aircraft. 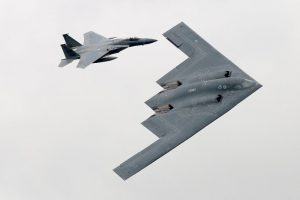 On the Sunday, visitors were treated to a surprise flypast by a stealth B-2 Spirit bomber that was taking part in an epic 23-hour transatlantic ‘Global Power’ training flight from Whiteman Air Force Base in Missouri. The aircraft was escorted by two F-15 fighters. 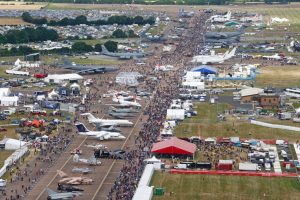