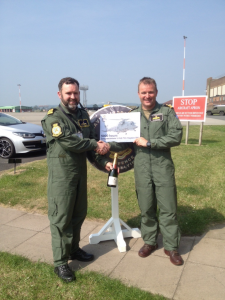 A third generation Fleet Air Arm and former Helston school boy Lt Cdr Tim Hayden, recently celebrated achieving his 5,000 rotary flying hours milestone.  Tim has had an esteemed career in the Royal Navy since joining in 1995.  His flying career has seen active service in support of operations in Iraq, Bosnia, Kosovo and more recently Sierra Leone during the Ebola crisis.

In 2000 he received a Queens Commendation for Valuable Service for his part in rescuing survivors from the stricken ferry Express Semina in the Adriatic.   He later served with 771 Naval Air Squadron, providing an invaluable search and rescue service to the south west region.

Tim qualified as a helicopter instructor in 2003, and has instructed student pilots through all phases of rotary flying training, from first learning to hover in a Squirrel HT1, to night deck landings at sea in a Sea King and Merlin 2.

He has also instructed Afghan pilots at Boscombe Down in the Mi-17 Hip in support of Operation Herrick.  Tim’s current role is based at RNAS Culdrose, where he is tasked with ensuring the standards and practices of Fleet Air Arm helicopter pilots and instructors, both ashore and afloat.