French Air force to fly at the Warbirds Over Wanaka Airshow 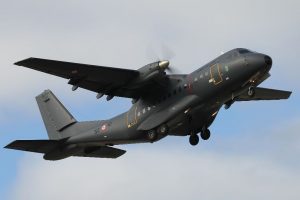 The French Air force is the first international air force to confirm it intends to be at the Warbirds Over Wanaka International Airshow next Easter.  The French crew will be bringing a CASA military transport aircraft to Wanaka for the third airshow in a row.  The aircraft and crew are stationed at the Tontouta military base in New Caledonia, in the South Pacific.  Major Laurent Monfort says the visit is dependent on operational issues nearer the time but at this stage they are looking forward to coming back to Wanaka.

Warbirds Over Wanaka General Manager, Ed Taylor, says they’re delighted the French are coming back.  “They are such a great bunch of guys to deal with and are a real hit with the public. We are expecting a strong military presence in 2018 as part of our 30th Anniversary celebrations.  That will be headed up by what’s hoped to be a big turnout from our very own RNZAF including a number of their larger aircraft and the new Black Falcons display team.  We have also extended invitations to a number of other air forces around the world to join us in 2018 and we expect to hear back from them later in the year,” says Ed.

The 30th anniversary Warbirds Over Wanaka International Airshow is being held on March 30th, March 31st and April 1st.  www.warbirdsoverwanaka.com

Photo by Gavin Conroy, supplied by the Warbirds Over Wanaka International Airshow team.