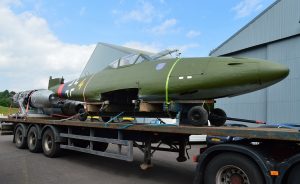 The 262 is returning to Cosford after 14 years on display at the RAF Museum London.  Prior to the move the aircraft was dismantled by Museum Technicians and Apprentices.

Ian Thirsk, Head of Collections at the RAF Museum said: “The first Messerschmitt Me 262’s entered service in the autumn of 1944, as the first turbojet fighter to do so it heralded a new era in aerial warfare and represented a step change in technology.  Today very few original examples survive so we are delighted to present this significant aircraft to our visitors at Cosford.”

The aircraft moves come as the museum prepares for the RAF’s centenary celebrations in 2018 that will see the museum transform its London site with a series of new permanent exhibitions opening in the summer of 2018. The multi-million pound development programme will see investments in new exhibitions, improved education and volunteering opportunities, and landscaping that will emphasise the site’s importance as a heritage airfield.

The museum is open daily from 10am until 5pm and entry is free.  For further information, please visit the Museum’s website www.rafmuseum.org/cosford