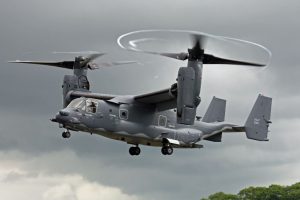 Visitors to this summer’s Royal International Air Tattoo at Fairford in the Cotswolds will be able to view one of the biggest gatherings of US military aircraft at a UK airshow in recent years.  In addition to the USAF display team the Thunderbirds, a B-1 and B-52 bomber and a state-of-the-art F-22 fighter already revealed, the Americans have announced that many more exciting aircraft will be arriving at the base as the airshow prepares to stage the biggest celebration of the USAF’s 70th anniversary in Europe.

The airshow, which takes place on July 14-16, will also feature two CV-22B Ospreys – one of which will be in the flying programme and the other on display in the static park. Also confirmed for the static park will be two F-16C fighter jets from Spangdahlem in Germany; an MC-130J Commando II tactical transport and tanker aircraft, based at Mildenhall and a C-17A Globemaster from Charleston, South Carolina.