A piece of railways history is to be unveiled at the Battle of Britain Memorial in Kent following the presentation of the squadron badge and original nameplate from a steam locomotive.  The Battle of Britain Locomotive Society presented the items from Battle of Britain class Pacific engine 34081 at a ceremony at the Nene Valley Railway (NVR), at Wansford, Cambridgeshire.

The nameplate and the badge of 92 Squadron – famously based at Biggin Hill during the Battle of Britain in 1940 – will shortly go on display at the Battle of Britain Memorial in Capel-le-Ferne, home to the National Memorial to the Few.  The long-term loan of the items was suggested by the preservation society as a way of ensuring the items could be on display in a ‘truly appropriate setting’.

They were presented to Gp Capt Patrick Tootal, Secretary of the Battle of Britain Memorial Trust, and Wg Cdr Andrew Simpson, one of the Trustees, by Ian Bowskill, Chairman of the Society, formerly known as the Battle of Britain Locomotive Preservation Society.  The items will be displayed in The Wing, the Trust’s visitor centre.

Locomotive 34081 entered service from the Brighton works in September 1948 but was withdrawn from Eastleigh shed in August 1964 and subsequently sold to Dai Woodham’s scrapyard at Barry Island in South Wales.

Bought by the preservation society in autumn 1973, she arrived at Wansford on the NVR near Peterborough on December 7, 1976.  Following restoration, it moved under her own power in 1998 – the first time since 1964 – and became a regular performer on various heritage railways until being withdrawn for overhaul at the North Norfolk Railway in 2008.

The engine returned to service on the NVR in February following 7 years of restoration work.  She was rededicated at a ceremony held at Wansford during which a Supermarine Spitfire from the Battle of Britain Memorial Flight performed a flypast.  After the re-dedication, replica nameplates were unveiled on the locomotive by Wg Cdr Tim McAuley, Officer Commanding 92 Squadron, so that the original nameplate and badge could be handed over to the trust. 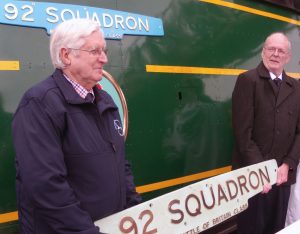 Gp Capt Patrick Tootal ( on the left) standing in front of the re-dedicated locomotive with Ian Bowskill, chairman of the Battle of Britain Locomotive Society