Flywheel at Bicester Heritage returns for 2017 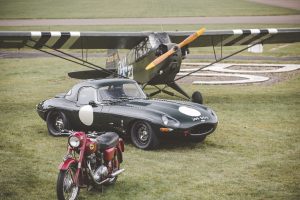 Last year, the Oxfordshire festival saw hundreds of historic cars, aircraft, motorbikes and military vehicles come alive on the demonstration track and in the sky at the UK’s best preserved Second World War bomber station, Bicester Heritage. The crowds were joined by Sir Stirling Moss OBE who, as well as signing autographs, was reunited with a host of his race-winning cars from the 1950s and 1960s.

Flywheel aims to bring to life the nostalgic ambience of the festival’s backdrop, Bicester Heritage, which celebrates 100 years since the Royal Flying Corps moved into the site.   Advance ticket prices start from £23 per adult and £52 per family. Each adult ticket includes free parking as well as a complimentary programme. Entry for children under the age of five years is free. http://www.flywheelfestival.com/