A first Italian Air Force G550 CAEW (Conformal Airborne Early Warning) aircraft has been taken on by 71° Gruppo of 14° Stormo based at Pratica di Mare, near Rome. The aircraft has received the military serial MM62293 and the unit code ‘14-11’.

A second aircraft is expected to be delivered to the Aeronautica Militare during 2017.

The acquisition is part of a military and industrial offset agreement that was signed between Italy and Israel in 2012. The deal followed the Israeli Ministry of Defense’s decision to purchase 30 examples of the Italian-produced M-346 advanced jet trainer, to replace the A-4 Skyhawk (Ahit) in the advanced training role.

For more on the Italian Air Force, check out AirForces Intelligence, the online air arms database brought to you by the AFM team. 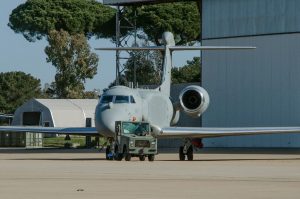