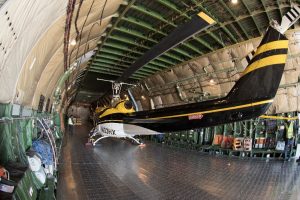 Volga-Dnepr carried four helicopters, a truck and flatbed trailer on a single An-124-100 flight.

Georgia-based Helicopter Express called upon Volga-Dnepr Airlines’ expertise in fast response transportation services for an urgent delivery of helicopters to fight the outbreak of wildfires that are plaguing the Chilean countryside.

Helicopter Express, contractors to the US Forest Service (USFS) and the Department of Interior (DOI), are highly-respected experts in fire-fighting operations and provide services such as aerial water delivery, prescribed burning, rappelling operations, and personnel delivery. For this mission, they were contracted by the Chilean government.

With safety and speed the highest priorities, one of Volga-Dnepr’s An-124-100 freighters touched down at Hartsfield–Jackson Atlanta International Airport less than three hours after the helicopters arrived at the airport for 11-hour flight to Santiago. The unique cargo carrying capabilities of the An-124-100 meant it was able to transport all three Bell 205 helicopters, a K-MAX 1200 helicopter and a flatbed truck and trailer onboard a single flight.

The total weight of the payload onboard the An-124-100, which took up the entire floor of the cargo hold, was 25 tonnes.

Peter Baldauf, Key Account Manager, Aerospace at Volga-Dnepr, Houston, Texas, said: “This was a case of two companies that are experts in their fields of operations joining forces to provide a fast solution to help the Chilean government tackle the wildfires in central and southern Chile. Although we regularly carry helicopters, including in the past to fight wildfires, this was the first time we have had the pleasure of working with the team at Helicopter Express so it provided us with an opportunity to demonstrate our capabilities. We expect to be working together again in the future in support of their full range of heavy lifting, disaster relief and helicopter charter services.” 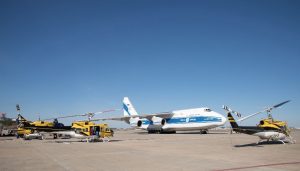 Getting ready to load the helicopters onto Volga-Dnepr’s An-124-100.