Two EA-18G Growler electronic attack aircraft of the Royal Australian Air Force (RAAF) arrived at Avalon, near Melbourne, today, to make the type’s public debut in Australia. The two aircraft arrived to take part in the Australian International Airshow that will take place at Avalon this weekend. A total of four EA-18Gs arrived in country last week when they were delivered to RAAF Base Amberley, Queensland.

Just months after the last four RAAF F/A-18Fs arrived in Australia in late 2011, Australia voiced interest in acquiring 12 additional Super Hornets and exercising its option to upgrade 12 of the pre-wired F/A-18F+ aircraft into EA-18Gs. Of the original 24 Super Hornets purchased by Australia, the last 12 were built with EA-18G wiring and waveguides installed out to the wing-fold, blanked antenna cut-outs, and structural provisions for equipment racks. 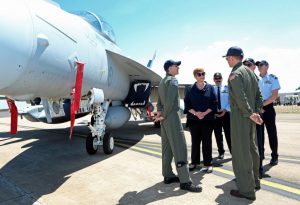 Minister for Defence, Senator the Honourable Marise Payne is briefed by the EA-18G Growler aircrew during the unveiling at the 2017 Australian International Airshow.  Commonwealth of Australia/Department of Defence

A formal request for 12 EA-18G modification kits was announced in May 2012, with plans to convert six Super Hornets into Growlers beginning in 2015, and then to convert the remainder in the early 2020s. Within a year of that announcement, however, the Australian government changed course and decided to retain its 24 Super Hornets and acquire 12 new-build Growlers. Notification of sale was announced on February 28, 2013, with an estimated cost of $3.7 billion (US). The sale further included AGM-88 High-speed Anti-Radiation Missiles (HARMs) and the new AGM-88E Advanced Anti-Radiation Guided Missile (AARGM).

In June 2014, Northrop Grumman began work on the first RAAF Growler’s subassembly, known as a shipset, which includes the center/aft fuselage section, twin vertical tails, and associated subsystems, at the company’s El Segundo, California, facility. In April 2015, the shipset was delivered to Boeing in St Louis for final assembly. The delivery represented the 115th Growler shipset produced by Northrop Grumman and the first for an international customer. The aircraft, numbered A46-301 and designated AG-1, was rolled out on July 29, 2015. 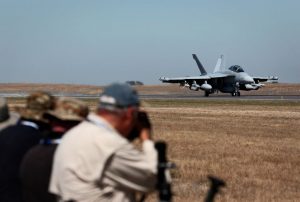 An EA-18G Growler aircraft arrives at Avalon for the 2017 Australian International Airshow. Commonwealth of Australia/Department of Defence