On February 11 a total of 49 US Army helicopters arrived in Europe for a nine-month deployment in support of Operation Atlantic Resolve.

These photographs, supplied exclusively to AirForces Monthly by Oliver Jonischkeit, show the unloading of the ship Endurance at the port of Bremerhaven, northern Germany. 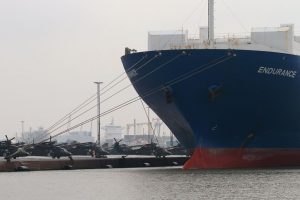 The helicopters are from the 10th Mountain Division’s Combat Aviation Brigade at Fort Drum, New York. They comprise 12 CH-47F Chinooks, 12 medevac-configured HH-60Ms, and 25 UH-60L/M Black Hawks operated by the brigade’s 2-10th Assault Helicopter and the 3-10th General Support Aviation Battalions. The rotorcraft were accompanied by 350 vehicles and 1,800 personnel from the 10th CAB. In addition, at least 20 AH-64 Apaches are due to arrive in the coming weeks. 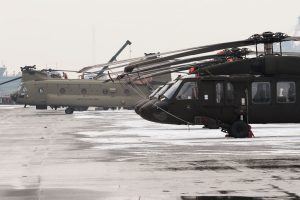 Additionally, the 1-501st Attack Reconnaissance Helicopter Battalion deployed 24 AH-64Ds from Fort Bliss to Illesheim. The ‘Iron Dragons’ will reinforce the 10th CAB. The battalion’s Apaches were flown to Naval Air Station Corpus Christi, Texas, where they were prepared from shipment to Europe at the Port of Corpus Christi. The aircraft arrived at the port of Antwerp, Belgium, on February 9.

Whereas Army Aviation units that previously rotated to Europe have been attached to the 12th Combat Aviation Brigade for command and control, the 10th CAB will be responsible for its own units.

Launched in the wake of the Russian intervention in Ukraine, Operation Atlantic Resolve is intended to demonstrate the United States’ continued commitment to collective security and to reassure NATO allies and partners in the region.