Technicians from the Libyan National Army (LNA) have returned to service another MiG-23BN fighter-bomber for use in the country’s ongoing civil war.

After suffering another loss to the fleet in January, the Libyan National Army Air Force has now begun to accelerate the refurbishment of old Floggers that had been in storage for years, as Arnaud Delalande explains.

On January 15 the Libyan National Army Air Force lost the last example of the MiG-23ML in its service. Serial 26453 was reportedly shot down and crashed in the Ganfouda/Bosnib area of Benghazi. The pilot ejected, but suffered some injuries. Less than a month later, LNA technicians completed the return to service of a ‘new’ MiG-23BN – serial 9119 – which will join MiG-23BN 4136, the only Flogger operational with the 1070th Squadron of the LNA. 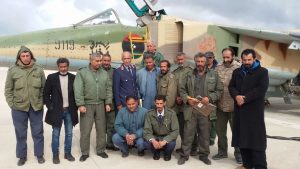 LNA Floggers have been heavily engaged in air strikes against Islamist groups in Benghazi and during the offensive in the Oil Crescent last September. But the attrition rate of the MiG-23 fleet has been high over the past year, with five losses and two pilots killed, and only four aircraft overhauled. 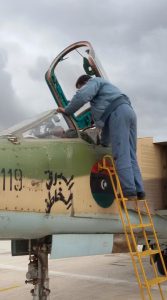