Airbus has revealed the first images of its next-generation oversize cargo airlifter, dubbed the Beluga XL, which is taking shape at the company’s production facilities in Toulouse, France.

The core airframe is an extract of an Airbus A330-200 freighter that has already been structurally reinforced and will form the platform on which the Beluga XL will be built.  Assembled in December, it currently lacks a nose fuselage and tail assembly, both of which will be added later this year as this first airframe starts an 18-month integration process.  This will involve the aircraft’s structure being completed and its mechanical and electrical systems fitted.  After which it will be moved to a second station for ground testing and engine installation. 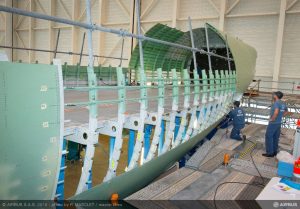 Work starts on the airframe integration of the first Beluga XL aircraft. ((Airbus)

Bertrand George, Programme Head for the Beluga XL, commented: “The coming year of final integration will be a series of small steps.  The number of holes to be drilled, and fasteners to be installed, is far bigger than on any other Airbus aircraft.”

A total of five Beluga XL airlifters are being built with the first expected to make its maiden flight next year.  After flight testing and certification the first aircraft is scheduled to join Airbus Transport International in 2019.  The new jets will replace the company’s existing fleet of Beluga STs, which were derived from the shorter-fuselage A300.  The manufacturer says when the first Beluga XL enters service it will provide crucial support to production ramp-up as it can carry a full set of A350 XWB wings. 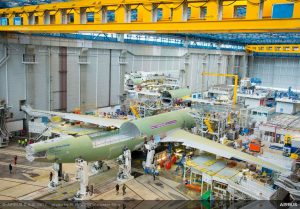 Integration of the aircraft’s core airframe will be performed inside the two-section L34 building at Airbus’ Lagardére industrial zone. (Airbus)