The aircraft, N9722L (c/n E700-741001), took off from the company’s east campus at Beech Field Airport, Wichita, Kansas on October 8 in the hands of experimental test pilots Ed Wenninger and Stuart Rogerson.  During the 2hr 2min flight, they tested the aircraft’s flaps, landing gear, pressurisation systems, stability and overall control.  The maiden flight came less than a year after the manufacturer unveiled details of what it claims it a “revolutionary” aircraft, the latest in its family of larger business jets.

Commeting on the sortie, Rogerson said: “I was extremely pleased with the performance of the Longitude during its first flight.  The level of maturity in flight characteristics is already very high and I was particularly impressed with how intuitive the flight systems are.  We accomplished everything we wanted to do during the maiden flight, setting the pace for the flight test programme to come.” 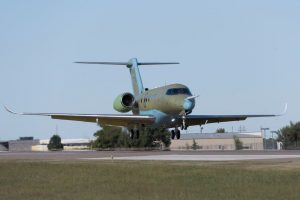 The jet touches down after a two hour maiden flight at the company’s Beech Field Airport, Wichita facility. (Textron Aviation)

The prototype will continue to expand the performance envelope, focussing on testing flight controls and aerodynamics, while the first production model, set to fly before the end of this year, will be primarily used for systems testing.  Type certification is expected to be completed in the third quarter of 2017 followed by first customer deliveries before the end of next year.

According to Cessna, the Citation Longitude has been designed for maximum passenger comfort and offers the lowest cabin altitude in its class at 5,950ft.  It will seat up to 12 passengers and has a stand-up, flat-floor cabin with a standard double-club configuration.

Scott Ernest, President & CEO of Cessna’s parent Textron Aviation remarked: “Today’s successful first flight of the Citation Longitude went exactly as we planned.  Our product development process is second to none and allowed us to move smoothly from launching the programme last November, to the first flight of the prototype in just 11 months.”