Boeing is forecasting demand for almost 7,000 new aircraft in China over the next 20 years.  In its latest China Current Market Outlook (CMO) issued on September 13, the US manufacturer – currently the biggest supplier of commercial aircraft to the Asian nation – estimates the value of these new aircraft at $1.05tn, making China Boeing’s first trillion dollar market.

“As China transitions to a more consumer-based economy, aviation will play a key role in its economic development,” Randy Tinseth, VP Marketing, Boeing Commercial Airplanes commented.  “Because travel and transportation are key services, we expect to see passenger traffic grow by 6.4% annually in China over the next 20 years.” 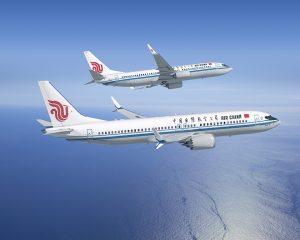 Boeing predicts that single-aisle aircraft will account for 75% of all deliveries to China. (Boeing)

Boeing predicts that China will require 5,110 new single-aisle aircraft up to 2035, accounting for 75% of the total demand.  This, the manufacturer claims, will be driven by low-cost and full-service carriers expanding their point-to-point networks.  It also expects China’s widebody fleet to triple in size, expecting up to 1,560 new deliveries over the next two decades.

Tinseth added: “The continuing expansion of China’s middle class, coupled with new visa policies and a wide range of widebody airplanes with new technologies, capabilities and efficiencies, gives us every reason to expect a very bright future for China’s long-haul market.”