↓ Skip to Main Content
Home › News › Regional A330 Takes Off

Regional A330 Takes Off

Saudia has become the first carrier to receive the A330-300 Regional.

The aircraft, HZ-AQ11 (c/n 1724), was handed over on August 18 and is the first of 20 examples the Saudi Arabian flag carrier ordered at the 2015 Paris Airshow.  All of jets will be operated under long-term leases from the International Air Finance Corporation, one of the Middle East’s leading lessors.

The latest variant of the A330 Family has been optimised for regional and domestic operations and will help to boost capacity on the carrier’s most popular routes.  The A330 Regional, a lower-weight version of the type – with a MTOW of around 200 tonnes – can carry 400 passengers on shorter-haul flights of up to 2,700nm (5,000km).  Airbus says the Regional offers airlines significant cost per seat reductions of around 26% compared to the company’s longer-range A330-300 model. 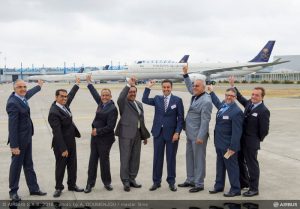 Saudi Arabian Airlines and Airbus officials celebrate the handover of the carrier’s first A330-300 Regional. (Airbus)

Saleh bin Nasser Al-Jasser, Saudia’s Director General enthused: “We are excited to welcome the first A330-300 Regional to our fast expanding Airbus fleet.  It is a step forward in recognising our commitment to a family of aircraft which has contributed immensely to our market growth.  The advantage of operating the new regional version of such a popular aircraft with its proven operational flexibility and lowest cost per seat, means unbeatable economics for our business as well as for our customers.”