Avro RJ Freighter on the Horizon?

The UK company says it is currently discussing the project with likely customers to assess market potential.  It hopes to build on the experience it gained on the production of the BAe 146QT (Quiet Trader), of which around 30 examples were completed, and has spent the last year assessing the suitability of the Avro RJ as a freighter.  This work has led to a full original equipment manufacturer (OEM)-designed specification for the freighter, which is now being offered to the market.

According to BAE Systems, the Avro RJ Freighter will carry up to 14 tonnes of cargo and fits the gap between the seven tonne freight capacity of current large turboprops and the 18 tonnes of the bigger Boeing 737 Classic conversions.  Currently the cost of converting a 737 is around $5m, while BAE Systems anticipates a converted RJ100 freighter would be significantly cheaper.

The manufacturer plans to use the same freight door as fitted to the 146QT, but will fit an upgraded actuation system to improve performance.  It is also investigating the addition of a modular underfloor fuel tank that can offer customers up to 1,000nm (1,852km) additional range.  The principal variant being considered for conversion will be the RJ100, although the company says the smaller RJ85 could also be upgraded using identical components. 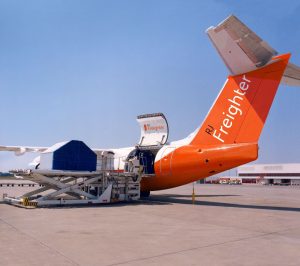 The timing of the announcement is unsurprising given a number of RJ100s will be leaving passenger service over the next few years and these will be available for the conversion programme.  BAE Systems says a typical RJ100 can be acquired for between $1-1.5m, and the freighter kit plus conversion would cost a further $2.2-2.8m.  These aircraft have typically accumulated between 20,000-35,000 flight cycles and, with the company’s Avro RJ Lift Extension Programme which starts at 40,000 flight cycles, the airframes could be cleared up to 60,000 cycles.

BAE Systems will work with a strategic MRO partner, although no formal contract has been signed yet.    It aims to carry out the initial conversions at Prestwick, Scotland where its engineering team is based.  This, it claims, will minimise risk, however, future conversions can take place anywhere a customer wants to do them.

The British firm is expecting to formally launch the programme in mid-November and has suggested the first conversion could be completed by the end of next year.  It anticipates typical lead-time from contract signature to be 9-12 months, with conversions taking around three months, subject to the specific modifications required.

The manufacturer added that it could follow this programme with the development of a combi variant, should there be sufficient interest.  It believes the Canadian market is well suited to the potential RJ freighter and, with the additional fuel capacity being offered, this would also eliminate costly refuelling at remote outstations.