British Airways (BA) has firmly embraced the Olympic spirit by applying special markings to a Boeing 747-400.

The jet, G-CIVA (c/n 27092), now bears the new name ‘VictoRIOus’ and will be used to fly Team GB and ParalympicsGB home from the Rio 2016 Olympic and Paralympic Games.  The aircraft also features a gold nose cone and ‘#greattobeBAck’ titles. 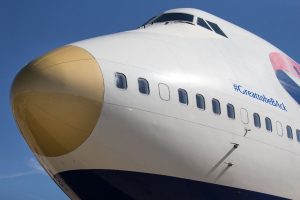 Alex Cruz, Chairman and CEO of British Airways, said: “We’re excited to be bringing the athletes home ‘happy and glorious’ following the Games! VictoRIOus is a very fitting name, reflecting the great pride we have for our sporting heroes, and is a great play on words too.”

British Olympic Association CEO Bill Sweeney added: “Though we are still deep in the middle of competing, one thing we know we will have had from start to finish and beyond is the incredible support of the Team GB fans, both in Rio and Great Britain and Northern Ireland.  That support means everything to the athletes and for them to arrive home on board VictoRIOus and share their experiences with their family, friends and fans is very special; and we thank British Airways for arranging this special plane home on the 23rd.”

The aircraft will operate a special charter, flight number BA2016, from Rio de Janiero back to London/Heathrow on August 22/23 carrying Team GB, followed by a second service on September 20 with  ParalympicsGB .

The name VictoRIOus was chosen by hundreds of Twitter users in a recent poll and was one of four short-listed entries selected by athletes and BA staff.   These also included Gold Force One, Golden Hauls and Mission Accomplished.