Shot at Warner Bros. Studios in Los Angeles, the new video explores several Hollywood film genres.  Shot on four different sets, some of the filming locations have been  previously seen in legendary movies such as Jurassic Park, Casablanca, War of the Worlds and the TV series True Blood.   Two ANZ Flight Attendants, Sophie and Daniel, also star in the video along with 20 extras including a cameo appearance by Chester the Chihuahua, who has also performed in Transformers and Grey’s Anatomy. 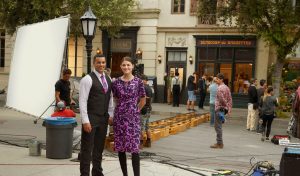 ANZ Head of Global Brand, Jodi Williams, said it had been “fantastic” to partner with Warner Bros. again – the studio also helped to produce the airline’s previous Hobbit-themed effort.

“Our inflight safety videos are now world famous and we know people anticipate their release.  The interest in them has been phenomenal and collectively they’ve attracted more the 83 million views online.  This latest video will again draw eyeballs to New Zealand from around the globe and encourage visitors to travel to our wonderful country.  It is also another great example of the diverse set of creative talent that our nation nurtures,” Williams added.