Airbus has demonstrated how it is using the latest drone technology to help carry out visual aircraft inspections. 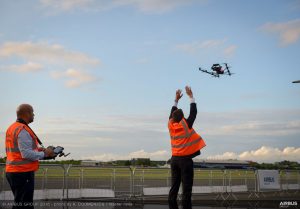 Manual launch of the drone during its demonstration flight over the A380 in the static park at the Farnborough Airshow. (Airbus)

The unmanned aerial vehicle (UAV), showcased on the A350 and A380 at last week’s Farnborough Airshow, is equipped with a high definition camera and performs visual inspections of the upper sections of the aircraft’s fuselage.  It is flown using an automatic flight control system supervised by a human pilot.  The drone follows a predetermined flight path while taking a series of pictures.  The images – including those showing any damage such as scratches, dents and painting defects – are then compiled into a 3D digital model, recorded in a database and then analysed.  Data acquisition using the UAV only takes 10 to 15 minutes, instead of two hours using conventional methods, while picture analysis can be undertaken anytime afterwards in the comfort of an office. 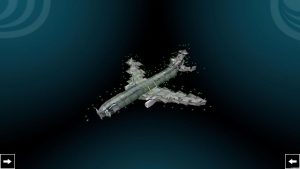 The 3D digital model of the compiled images taken by the drone. These are then used to analysis the aircraft for any damage. (Airbus)

The manufacturer says the benefits of this innovative tool and process are significant.  Operators no longer need to use a telescopic platform to perform visual inspections, it also reduces aircraft downtime as well as providing better working conditions and improved safety for quality inspectors.  The company is conducting a full-scale industrial trial of the system on its A330 aircraft and is working on implementing it on other programmes.

Posted in News Tagged with: A330, Airbus