Emirates Launches Second LAX Link & A380 Touches Down In Vienna

Emirates is now flying twice a day between its Dubai International Airport hub and Los Angeles.

The first service of flight EK217 departed the UAE on July 1 and was operated by Airbus A380-861 A6-EON, which wore a specially-designed Los Angeles Dodgers livery.  The scheme was applied to celebrate the new service as well as the airline’s sponsorship of the baseball team.

“We’re thrilled to continue growing our footprint in Los Angeles, the second largest city in the United States, and to be able to provide more flight choices to more customers daily as well as doubling the economic benefits Emirates’ flights provide to Southern California,” said Rob Gurney Senior Vice President of Commercial Operations, The Americas.

A three-class Airbus A380 will be used on the flights, providing 14 private suites in First Class, 76 seats in Business and 401 seats in Economy. 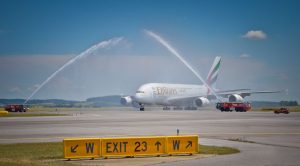 July 1 also saw Emirates introduce the A380 on its flights to Vienna, making it the 41st destination to be served by the airline’s flagship.