Boeing and VietJetAir – currently an all-Airbus operator – announced a surprise deal for 100 737 MAX 200s on May 23, during an official state visit to Vietnam by US President Barack Obama.

“We were disappointed in VietJet[Air],” Leahy told Airliner World during the recent Airbus Innovation Days 2016 event at the company’s Hamburg/Finkenwerder site.  “There was clearly some political implication.  They did get a very, very, very good price from Boeing on that package.  We chose not to go after Boeing on the pricing.” 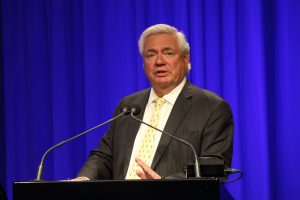 Leahy said he had spoken to VietJetAir and was reassured the airline is committed to its outstanding orders with Airbus.  At the end of April, the carrier had a fleet of 27 A320ceos and five A321ceos, with two A320ceos, 19 A321ceos, 42 A320neos and 21 A321neos on order.

“We wanted to know what VietJet[Air]’s plans were,” explained Leahy.  “They said ‘no, we’re staying with Airbus – we have the right with Boeing to lease these aircraft out’, so we will see.  They have assured us they have absolutely no intention of replacing Airbus airplanes with Boeing airplanes.”