Six months after the prototype Mitsubishi Regional Jet (MRJ) first flew on November 11, the second flight test (FTA-2) aircraft has taken to the sky.  On May 31, JA22MJ (c/n 10002), took off from Nagoya Airport and headed to airspace off the Pacific coast where the aircraft’s basic flying characteristics and functionality were confirmed. 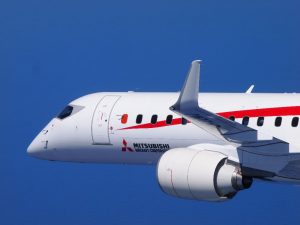 Hiromichi Morimoto, President of Mitsubishi Aircraft Corporation commented: “As with the first flight, we had a quiet, smooth first flight with FTA-2.  After this, we will move ahead smoothly with development of the subsequent flight test aircraft, and make our utmost efforts towards type certification acquisition and the first customer deliveries.”

Later this year Mitsubishi Aircraft is due to establish its main flight testing base at Grant County International Airport at Moses Lake in Washington State where the majority of the type’s certification work will be carried out.  The MRJ-90 is expected to receive its regulatory approvals by early 2018, with first deliveries slated for mid-year.