The Airbus A320neo powered by CFM International’s LEAP-1A engines has been granted its type certification by EASA and the FAA.  The announcement was made earlier today (May 31) during the European manufacturer’s two-day Innovation event being held this year in Hamburg.  Airbus says deliveries of the LEAP-powered variant will start from mid-year now approval for the second engine option has been received. 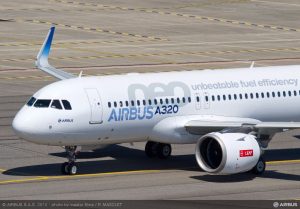 Fabrice Brégier, Airbus’ President and CEO, said: “This key milestone for the A320neo , and its second engine option – the specially developed LEAP-1A – is a double seal of approval by the two major international governing bodies and comes after the A320neo Family had successfully accomplished a rigorous programme of certification trials.  We are looking forward to the entry into service of the LEAP-powered models in the very near future.”

The manufacturer said the two LEAP-powered development aircraft have accumulated over 1,000 flight hours in more than 350 flights – including 150 flight hours in an airline-like environment to ensure operational maturity at entry into service.  Certification of the remaining aircraft/engine variants with LEAP engines will follow in the coming months.