Delta Air Lines has delivered a major boost to Canadian manufacturer Bombardier after signing a firm order for 75 CS100s.  The deal, valued at $5.6 billion at list prices, also includes a further 50 purchase options and is the largest commitment for the type to date.

Announcing the order on April 28, Delta’s incoming CEO Ed Bastian said: “As we reshape our fleet for the future, the innovative on-board experience of the C Series is a perfect complement for the top-notch service provided every day by Delta people.” He continued: “These new aircraft are a solid investment, allowing us to take advantage of superior operating economics, network flexibility and best-in-class fuel performance.”

Fred Cromer, President, Bombardier Commercial Aircraft added: “Welcoming Delta Air Lines to the C Series family of operators is a watershed moment for our game-changing aircraft. As an industry leader, Delta consistently ranks first with customers, business leaders and its peers – a benchmark for operational performance. 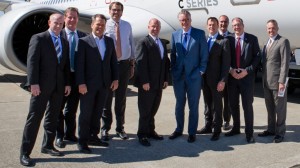 “This order is a resounding endorsement of the CS100 aircraft performance and its exceptionally low operating costs. In addition, its widest aisle, widest seats and largest bins in its class will be attractive features for Delta’s passengers.”

Bombardier is yet to confirm the delivery schedule, though it is understood the US carrier will have the option to convert at least some of its order to the larger CS300.

Crucially, the Delta deal, coupled with the Air Canada commitment from early this year, extends Bombardier’s C Series order book above the company’s target of 300 orders before the type enters commercial service with Swiss International Air Lines this July. It also extends the production backlog beyond 2020, when the manufacturer predicts it will break even on the C Series programme.