↓ Skip to Main Content
Home › News › A Taste of Finland

A Taste of Finland

Finnair has embarked on a bold new strategy aimed at strengthening its position in the European and Asian air travel markets.  The multi-faceted approach, which includes a new aircraft cabin design and a signature menu, is intended to give passengers a unique Nordic experience.

Speaking at the carrier’s annual press conference in Helsinki on April 5, Chief Commercial Officer Juha Järvinen told Airliner World: “All of our major competitors in Europe, the Middle East and Asia are increasing capacity so it has been important for us to reposition ourselves in this tough environment.  We strongly believe we have a unique position in the northern hemisphere traffic flows and we’re able to capture a bigger share of the traffic between Europe and Asia.”

Introducing the concept, Järvinen said it was based on the need to deliver the best customer experience.  “The airline industry has been through a rough time and many carriers have cut back on service elements.”

Finnair has invested heavily in the new concept that the CCO said combines the best elements of the Nordic region.  “We believe that, regardless of nationality, customers want to experience the best of our home region.  We’re renowned for clean air, fresh designs and simplicity and passengers appreciate this.”

Järvinen highlighted the mounting competition Finnair is facing in the global market, particularly from the ‘big three’ Gulf carriers –Emirates, Etihad Airways and Qatar Airways.  “It’s important to have a unique position but being Nordic doesn’t necessarily mean having gold taps and a five-star product.  It’s about a well-functioning, well designed and high quality [offering] but not over the top.” 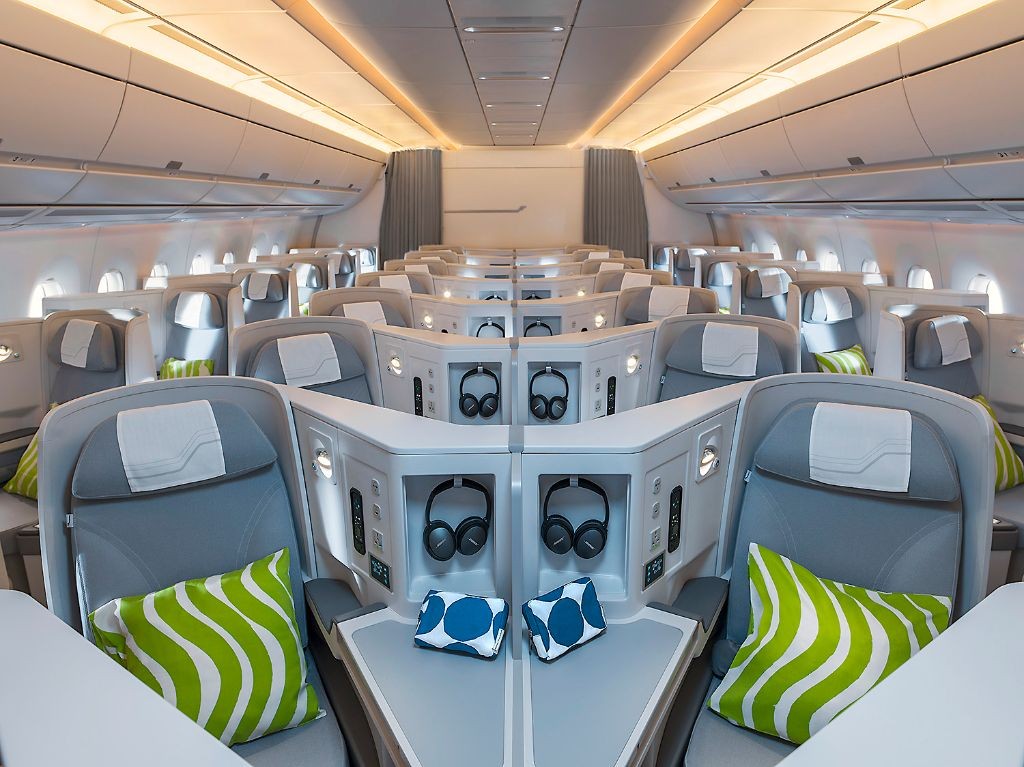 The A350’s cabin design is intended to give Finnair passengers a unique Nordic experience. (Finnair)

The cornerstone of Finnair’s strategy is the Airbus A350, the first of which joined the fleet last October.  “Last year we carried 10.3 million passengers.  It’s the first time we’ve passed the 10m milestone but this is only the beginning for us and, with the arrival of the A350, we are now accelerating our growth,” Järvinen said.

The most significant advantage of the new Airbus widebody is the aircraft’s increased payload and performance over Finnair’s A330s.  This has enabled the Helsinki-based carrier to expand in already congested markets such as Shanghai and Hong Kong where, according to the CCO, demand has been outstripping capacity.  “The A350 gives us more seat and cargo capacity on our Asian operations,” Järvinen explained.  “Air freight accounts for around 17% of the total turnover generated by our Asian flights and the improved aircraft performance means we can fly these services without the weight restrictions in place on the A330.”

The carrier currently has four A350s in its fleet, and plans to operate seven by the end of this year.  Their arrival has enabled Finnair to phase out some of its older long-haul jets.  The first two A340-313s, OH-LQF (c/n 168) and OH-LQG (c/n 174), were withdrawn from service in 2015 with the five remaining examples due to follow by the middle of next year as additional A350s are delivered.

The airline has used the incoming aircraft to launch its new on-board Wi-Fi product, which is available as standard on the A350 and will be rolled out across its A330s by spring 2017.  The Panasonic system is free for Business Class and Premium Tier members, and can be accessed by Economy passengers for a fixed fee of €15.  “We opted for a pay-to-access model because our Wi-Fi actually works.  Lots of airline offer free internet but the bandwidth is so bad that you can’t really use it,” Järvinen noted.  “We have invested heavily to ensure we have plenty of bandwidth and capacity that delivers.”

The Finnish flag carrier has long extolled the virtues of its Helsinki base as a point of transit for Asia-bound traffic and, last year, accounted for 6% of all traffic between Europe and China.  The airline has confirmed plans to add two new services this year – Guangzhou and Fukuoka – increasing its network to 17 destinations in Asia.

Finnair is also making significant efforts to promote its home nation as a destination in its own right via StopOver Finland.  The new initiative, funded by the country’s Ministry of Employment and the Economy, unites the airline with other key elements of the country’s tourism industry and offers passengers a variety of activities and tour packages lasting from five hours up to five days.

Posted in News Tagged with: Airbus A350, Finnair