Airbus has taken another major step in its strategic partnership with China after breaking ground on a new A330 Completion and Delivery Centre (C&DC) in Tianjin.

Final assembly of the A330 will remain in Toulouse, but aircraft destined for Chinese and Asian customers will be flown to the Tianjin C&DC for completion activities including cabin installation, aircraft painting and flight testing as well as aircraft delivery and customer flight acceptance.  Construction work on the C&DC is expected to take around a year to complete with Airbus anticipating initial deliveries from September 2017.

Speaking at a special ceremony in Tianjin on March 2, Fabrice Brégier, Airbus President and CEO remarked: “The ground breaking ceremony for the A330 C&DC in Tianjin marks a new milestone for Airbus’ international footprint and underlines the strong co-operation with our Chinese partners.   This event is significant because this will be our first completion and delivery centre for widebody aircraft outside of Europe.  Our long-standing cooperation with China spans single aisle and now also widebody aircraft and we will continue to look for further opportunities in the future.”

Two days earlier, Star Alliance carrier Air China announced through a statement on the Shanghai stock exchange that it has signed a purchase agreement for 12 additional A330-300s in a deal valued at $3.1bn.  The first aircraft is due to arrive at the carrier’s Beijing Capital International Airport hub later this year, with deliveries running through to 2018.  It remains unclear whether this order forms part of the 130 aircraft deal China and Germany signed during German Chancellor Angela Merkel’s visit to China last October. 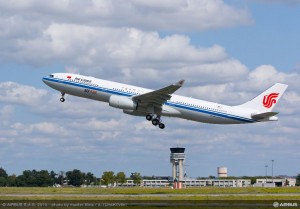 Posted in News Tagged with: A330, Air China, Airbus