bmi regional has opened its new base at Birmingham with the launch of flights to Graz, Austria.

Flight BM1401 operated for the first time on February 27.  The service is designed to tap into the strong automotive ties between the two cities, with the schedule built around corporate clients’ requirements.  It will initially operate on Mondays and Fridays, rising to four times weekly in March.

A single Embraer ERJ will be based at Birmingham with additional routes to Gothenburg and Nuremberg launching on May 8.

Jochen Schnadt, Chief Commercial Officer for bmi regional, told Airliner World that the carrier’s research pointed to an untapped market from Birmingham. “They might not necessarily be huge markets but given the size of our aircraft we don’t necessarily need huge markets,” he said.  “That’s where the research very quickly pointed towards Graz.  Nuremberg was hot on its heels in terms of the automotive suppliers based there and Gothenburg has historical ties [to the airline].”

Schnadt said that despite a short lead-in time to the launch, forward bookings had been encouraging.

“With Graz in particular we have very strong engagement with some really key companies. They have also dictated the schedules to a large extent,” he explained.  “Everybody talks about satisfying the customers, and the same of course applies to us, but I think what is unique to us is we go to great lengths designing networks and schedules around customers’ specific needs.  The schedule you see for Graz is a classic example where it is driven by a particular corporate [client].”

One passenger who Airliner World spoke to said the new direct flight will save him a minimum of two hours travelling each week; previously he had to route via either Vienna, Munich or Frankfurt. 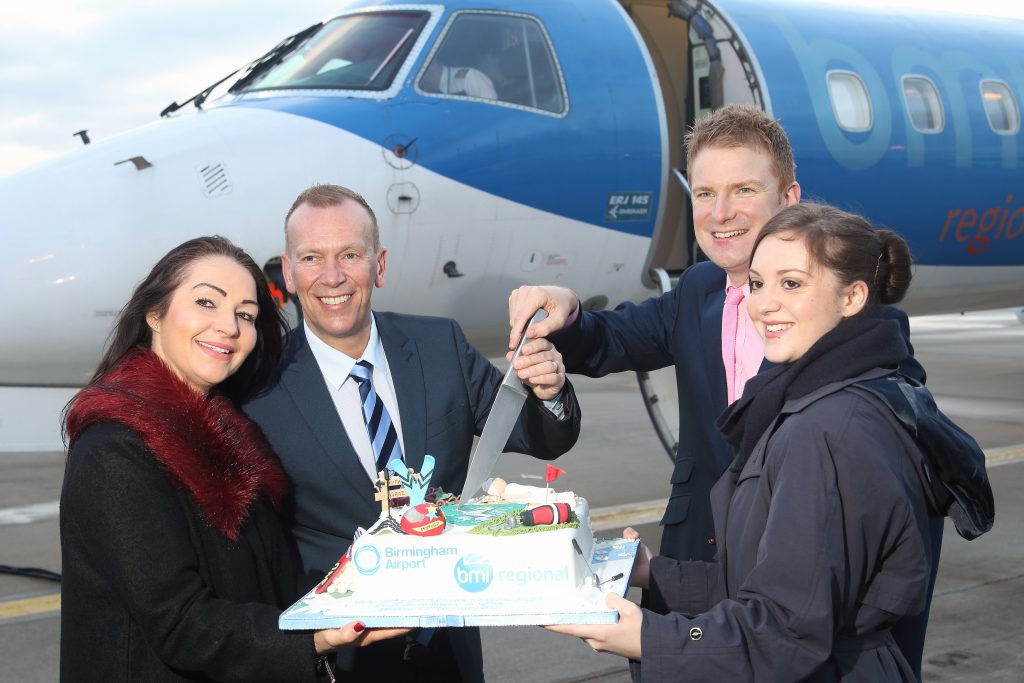 Staff from bmi regional and Birmingham Airport celebrate the launch of the carrier’s new base. Key-James Ronayne

William Pearson, Aviation Director of Birmingham Airport said: “All three routes are currently unserved from Birmingham, so we thank bmi regional for filling these gaps and offering leisure travellers the chance to visit these vibrant city break destinations in Sweden, Austria and Germany with an airline that offers excellent service, efficiency and value.”