A Good Year for Airbus 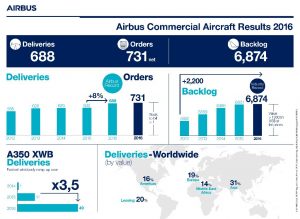 Fabrice Brégier, President of Airbus Commercial Aircraft and Chief Operating Officer of Airbus, remarked: “We have delivered on our objectives in a challenging environment, proving our ramp-up readiness for the future.”  He went on to highlight some of the notable milestones the company achieved during 2016 including the delivery of Airbus’ 10,000th aeroplane and the first flight of the A350-1000.  It also commenced deliveries of both engine variants of the A320neo, while the Pratt & Whitney powered A321neo was certified and the first US-assembled aircraft were delivered from its final assembly line in Mobile, Alabama.

Looking forward to 2017 the European manufacturer revealed it has raised the average list prices for its aircraft by 1% across its entire commercial product line, effective from January 1.  It says the increase has been calculated per its standard escalation formula that considers the prices of materials and commodities.