Qatar Airways has signed a multi-billion dollar order with Boeing for up to 100 widebody and single-aisle aircraft.

The $11.7bn deal consists of 30 787-9 Dreamliners and ten 777-300ERs, increasing the Doha-based carrier’s firm commitments for the US manufacturer’s widebody aeroplanes from 65 to 105, including 60 next-generation 777Xs.

More significantly, the Qatari flag carrier has also signed a letter of Intent (LOI) for up to 60 737 MAX 8s, valued at an additional $6.9bn if converted into firm orders.  This would be Boeing’s first single-aisle aircraft to serve with the airline’s fleet and marks a notable departure for the current all-Airbus narrowbody operator. 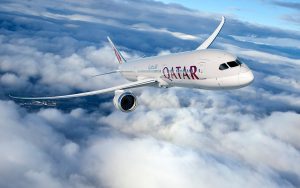 Qatar Airway’s Group Chief Executive, Akbar Al Baker, remarked: “We are already one of the fastest growing airlines in the history of aviation, today we announce a significant and historic aircraft order that will power our future growth for the years and the decades ahead.”

Ray Conner, Boeing Commercial Airplanes President and CEO, commented: “We are so very proud that a discerning and market-leading customer like Qatar Airways not only continues to endorse our current products, but also has confidence in Boeing’s new technology that will soon be evident on the 777X and 737 MAX.”

The confirmation of the LOI for 737 MAX 8s will be a further blow to Airbus which is dealing with ongoing, but unrelated, issues with Qatar Airways’ A320neo and A350 deliveries.  Addressing a press conference in Doha on August 31, Al Baker said: “Qatar Airways is at risk of reporting a financial loss this year due to these ongoing issues.”  He also told reporters that the airline had cancelled commitments for two A320neos – making three in total – because the company felt the jet and its engines are not meeting contractual obligations.  He went on to say the airline would “keep on cancelling” orders as each jet passes its delivery date until the situation is resolved.  Al Baker has since threatened to walk away from the entire 46-aircraft order. 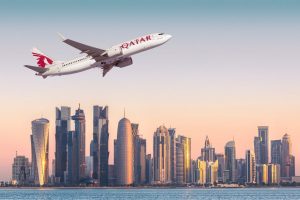 The Gulf carrier has signed a letter of intent for up to 60 Boeing 737 MAX 8s. (Boeing)

Qatar Airways could receive its first MAX in 2018, but Al Baker insisted the decision to order Boeing single-aisle aircraft wasn’t intended as a retaliation against the European planemaker.  He said the carrier does still want to follow through on its 2011 order for A320neo and A321neos, despite the ongoing issues with the type’s Pratt & Whitney geared turbofan engines.  He said the delays left him with “no alternative” but to order the “reliable” narrowbody aircraft from Boeing, which is expected to enter service with launch customer Southwest Airlines next year.