Korean Air Aerospace Division (KAL-ASD) has delivered the first set of Sharklets for the Airbus A330neo.  The shipset, which was handed over to the European manufacturer at an event in Busan on September 13, marks the conclusion of a nearly 18-month development programme that kicked off in April 2015.

The new Sharklets, which measure 6.6ft (2m) wide and 13.1ft (4m) long, are a bigger version of those pioneered on the smaller A320 Family.  They will extend the A330neo’s wingspan from the current 197.8ft (60.3m) to 210ft (64m) while increasing lift and reducing drag.  They are a key part of a wider package of aerodynamic improvements for the A330neo that will reduce carbon dioxide emissions and increase fuel efficiency by 4%. 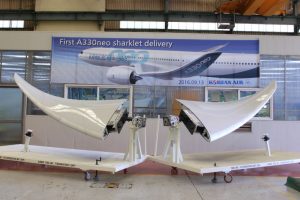 The Sharklets, which decrease aerodynamic drag by helping reduce the spiral-shaped vortices formed at aircraft wingtips during flight, are currently offered as an option on members of the in-production A320ceo Family, and are fitted as standard on A320neo.

The A330neo Sharklet programme is the latest in a series of projects undertaken by KAL-ASD on behalf of Airbus.  This also includes A320 Sharklets (manufactured by the Korean firm since 2009) and cargo doors for the A350 XWB.