Names of hundreds of football fans have been applied to Lufthansa Boeing 737-330 D-ABEK (c/n 25414) in support of the German national team’s bid for glory at this summer’s Euro 2016 tournament in France.

Coach Joachim Löw and his 22-man squad – minus former Arsenal man Lukas Podolski, who was absent following the birth of his child – departed Frankfurt Airport on the jet on June 7 bound for Chambéry-Savoie Airport near the team’s base at Evian-les-Bains.  The aircraft was converted into an all-business class configuration for the flight.

“We are proud that we, as the ‘Official Carrier’ of the DFB [German Football Association], may again fly the national team to another major tournament. Many Lufthansa employees are already in football fever and are keeping their fingers crossed for the German team,” said Klaus Froese, CEO Lufthansa German Airlines Frankfurt Hub, at the send-off in the Lufthansa First Class Terminal in Frankfurt.

The jet also wears the ‘Fanhansa’ logo which was first applied during the team’s victorious 2014 World Cup campaign in Brazil.  Fans were invited to apply online to have their name added to the jet’s fuselage and more than 65,000 applications were received.  From this around 300 names were selected to be added to the aircraft. 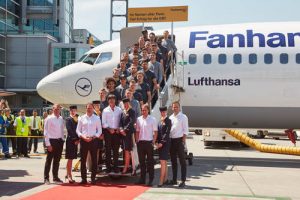 Oliver Bierhoff, manager of the national team, added: “After the very emotional return from Rio with the Fanhansa Siegerflieger, we are delighted that Lufthansa has again made a special plane available to us.  The support of the fans is hugely important for the team.  Therefore, it is a wonderful signal that so many people have applied to co-design this fan plane.”